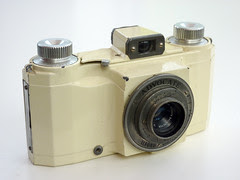 Ilford Advocate
Originally uploaded by pho-Tony
This is one of the series 1 Advocates that went on sale in 1949 and was superseded by the series 2 in 1953 (both models look almost identical, the later model having an f3.5 lens and flash synchronisation).
This is an extract form the British Journal Photographic Almanac of 1950 (taken from http://www.photomemorabilia.co.uk/Ilford/Advocate.html):

The 'Advocate' is a landmark in British camera construction. As pleasing in appearance as it is accurate in construction, it brings the precision miniature into the medium price class and gives the lie to the assertion that we cannot hope in this country to compete in the miniature market. The body is a pressure die-casting of aluminium silicon alloy, finished in hard-stoved ivory enamel finish which is delightful to handle, extremely resistant to scratching and wear, and absolutely incapable of picking up dirt. The lens, too, is out-standing. It is a bloomed Dallmeyer British made f/4.5 of only 35-mm. focal length, a wide angle coverage which, at f/4.5 on so short a focus, gives a depth of field that renders a rangefinder unnecessary for the great majority of work: for portraiture and other work in which a smaller angle may be appropriate the perfection of the Dallmeyer lens permits of adequate definition by enlargement from rather less than the whole frame.

I took 15 frames in last week's camera, and have transferred the film to the Advocate today. The current plan is to take about 10 frames this week, before finishing the film off in week 5 in the Olympus Ecru.
Posted by pho-Tony at 17:33