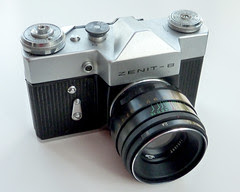 Zenit-B
Originally uploaded by pho-Tony
So, I've put a film in my first camera of the year, and taken a couple of pictures in the local park. This is a Russian Zenit B SLR, made in the 1970s and still going strong, it's entirely manual, and I also used a Leningrad 4 exposure meter, another piece of soviet era kit. This camera is very similar to the first SLR I ever used at school, the Zenit E. The lens is the 58mm f2 Helios, which is on the long side for a "standard lens".
Posted by pho-Tony at 17:14