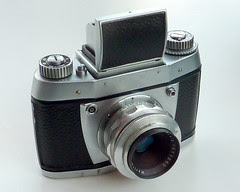 Exa-1
Originally uploaded by pho-Tony
There were only a few frames left on the film from last week's Zenit-B, confirming my suspicion that the wind on mechanism is faulty, there will probably be a few blank frames and some uneven spacing when I get it processed.
The film is now in this Exa 1, a camera made by Ihagee of Dresden in the early 1960s, this one has the name plate missing, but I'm pretty sure it's the model "1". The lens is a fully manual Meritar 50mm f2.9. I only expect to get a handful of frames out of it, so hopefully will get the film developed later this week.
Posted by pho-Tony at 15:48