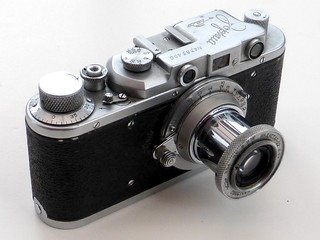 This Russian camera is a direct copy of the Leica II. Commonly known as the "Zorki 1" in fact there is no number in the model name, the convention has been adopted to distinguish it from later numbered models.
These Zorkis were made in Kraznogorsk from 1948 until around 1957, whereas the camera of which they are a copy came about a decade earlier.
This is the first time I have put a film in this one, I have already ascertained that the shutter only fires reliably at one speed (1/200th sec) so I will stick with that speed and adjust the aperture according to the lighting conditions.
I've loaded it with some Rollei RPX 400 black and white negative film.
Posted by pho-Tony at 19:21 No comments: 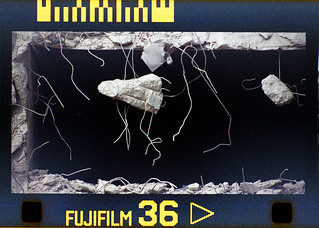 The Pronea accepts all existing Nikon lenses, this was taken with the 18-200mm zoom made for the digital D70 series. At the wide end of the zoom range there is noticable vignetting, but at the long end this is not a problem.
Posted by pho-Tony at 22:54 No comments: 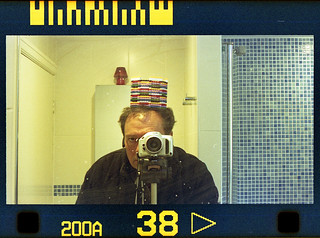 The film is expired ISO200 Fuji colour negative stock, which was in the camera when I acquired it.
Posted by pho-Tony at 22:52 No comments:

A series of four consecutive frames, scanned to include the sprocket holes and edge markings.
Posted by pho-Tony at 22:50 No comments: 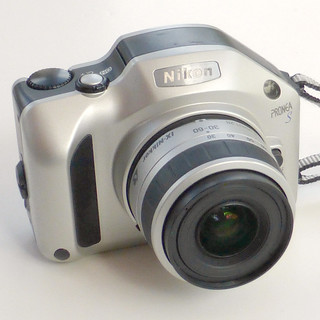 The Pronea uses the APS cassettes which are no longer made. APS (Advanced Photo System) was introduced in 1996 as a fool-proof amateur format with a range of features tied in with a built in magnetic coating on the film which recorded various data to instruct the processing equipment how to treat the image.
Soon after it was launched, digital camera became affordable for the mass market and the APS format was destined for the history books.
This fully featured automaitc SLR came from a charity shop, the ultimate destination of many consumer level film cameras from the 1990s.
Posted by pho-Tony at 22:47 No comments: 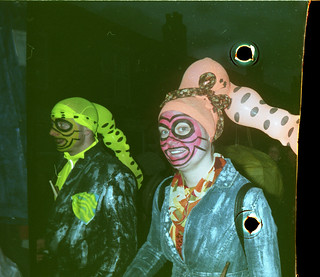 The very last frame, or part-frame, on the roll. This shows the piercings where the film clip gripped the film as it hung to dry. This one was taken with the built in flash.
Posted by pho-Tony at 19:31 No comments:

This was the last photo I took before leaving Budapest, where I bought this camera only a few hours earlier. It's a crude in-camera panorama taken in the airport departure lounge.
Posted by pho-Tony at 19:30 No comments: 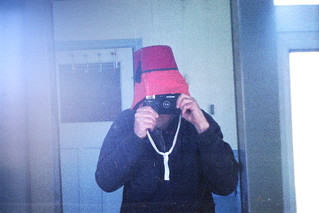 For a camera costing around 50p, the results aren't bad. This one is inevitably underexposed as it was taken indoors, albeit on a bright day and near the window.
Posted by pho-Tony at 19:28 No comments: 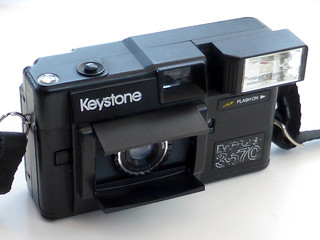 This is a very basic, very cheap, point and shoot 35mm camera, but I was drawn to it by the barn doors style lens cover. This is an unusual feature and is generally associated with more sophisticated and expensive cameras, most famously the Voigtlander Vitessa that I used in week 89.
I found it in the "broken cameras" basket at a camera shop in Budapest that we walked past in the last hour or so of a visit to the Hungarian capital. Not long before I had paid 180 forints (approximately 50p in UK money) to use a public toilet, this camera was priced at 190 forints, and a cursory examination suggested that it was in working order, despite the label on the box, and the warning form the shop assistant. I had nothing to loose at this price, and shortly after leaving the shop, having found some shade, I loaded it with a roll of Agfa Vista film from Poundland, so the film cost twice as much as the camera! I shot most of the roll in Budapest, then, having ascertained that the flash was working (I don't carry spare batteries with me) I finished it off at the Sharrow Lantern Festival in Sheffield. Results to follow.
Posted by pho-Tony at 22:15 No comments: 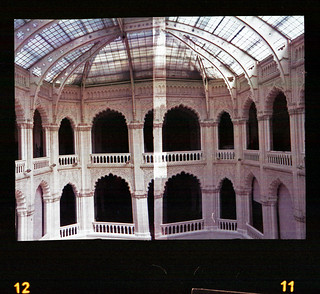 A crude in-camera panorama made by slightly under-advancing the film to get a slight overlap between adjacent images. This was a brightly lit glazed courtyard, so there was just about enough light for this single speed, fixed aperture camera.
Posted by pho-Tony at 09:02 No comments: 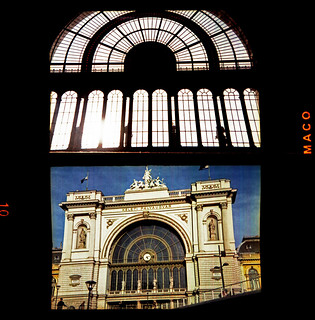 Two more photos from Budapest, the inside and outside of the Eastern Main Railway Station. You can see from this full width scan that the camera achieves 24 exposure per roll but using less than the full width of the negative
Posted by pho-Tony at 08:58 No comments: 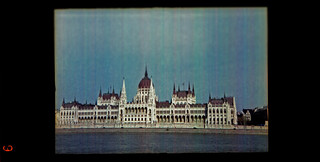 The Minicomet is a good, if very basic camera to take on holiday as it is so small, at the time it was made, the ability to squeeze 24 exposures onto a roll of 127 film would also have been useful. I took mine to Budapest, and this is one of the typical tourist snapshots that I made.
Posted by pho-Tony at 08:55 No comments: 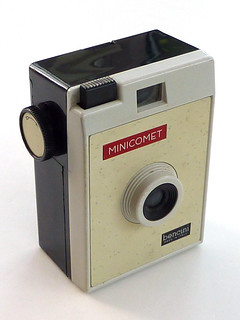 I've never come across another camera that produces 24 images on a roll of 127 film. I found this one in a car boot sale a couple of years ago, it had a film in it, and I finished that off and developed it, the images were very degraded, and I decided that I would use a fresh film in it at some point. The time has come, and I've loaded it with my last roll of Macocolor colour negative film.
Posted by pho-Tony at 20:13 No comments: 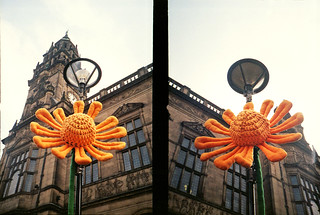 Two giant spring flowers that appeared in Sheffield city centre this week.
Posted by pho-Tony at 22:12 No comments: 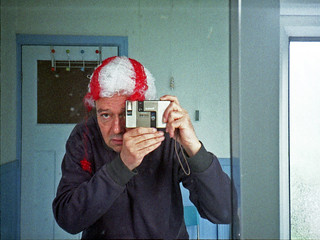 There was just about enough light to take this indoor photo, the auto-focus seems to have done a reasonable job.
Posted by pho-Tony at 22:10 No comments:

Half-frame cameras are ideal for making in-camera panoramic sequences, this is a picture of the fountains in Sheffield's Peace Gardens, dyed yellow to mark the forthcoming Tour de France event. 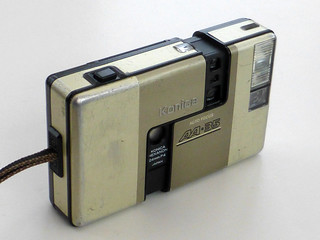 I found this in a local flea market a couple of weeks ago. At first glance it looks like a disc camera, and given it's scruffy state, I nearly didn't pick it up, but when I did I realised it was a half frame 35mm camera. There was no battery in it, so no way of knowing if it worked, but for £3 I decided it was worth a gamble. Back home, after a bit of Googling, I found a manual for it and put the correct battery in. It all seems to work, so I loaded it with some Agfa Vista film from Poundland.
Posted by pho-Tony at 20:19 No comments: