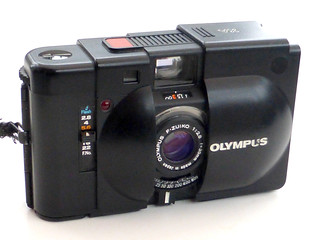 The Olympus XA series were very popular, and the XA2 in particular is easily found for very little money. Arguably the XA is the top of the range, with a coupled rangefinder and aperture prioity automatic exposure, together with a 35mm f2.8 lens. My own favourite of the series is the XA4, which, while it is fully automatic with no manual over-ride, has an f2.8 28mm lens, and focuses down to 30cm.
Posted by pho-Tony at 15:01 1 comment: 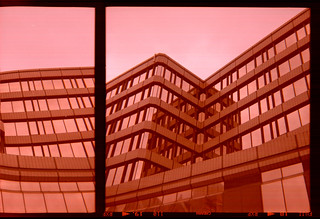 After taking the last frame, I wound on for an estimated further frame, and took another picture to see if there was any film left. As you can see, there was a small sliver before the end.
Posted by pho-Tony at 22:52 No comments: 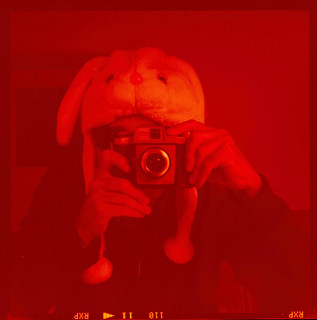 As always, with a simple camera, under-exposure is the order of the day for these indoor mirror self-portraits, the thin negative exaggerates the colour shift caused by cross-processing.
Posted by pho-Tony at 22:49 No comments: 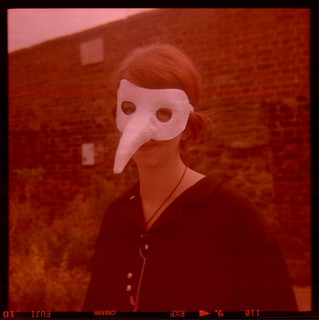 For this shot I used a Kodak No.1 close up lens made for the "320" filter mount that the Cresta uses. The table that came with the lens suggested that 1m was the correct distance.
Posted by pho-Tony at 22:47 No comments: 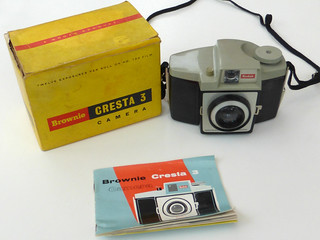 The Brownie Cresta 3 was made between 1960 and 1965 and was one of the workhorses of family holiday snapshots well into the 1970s.
This one was £2 at a local market, and was in its original box and still had a film in it. The film was on exposure 11 out of 12, so I wound on, took the last frame and then developed the film to see what was on it.
In addition to my photo, there were some grossly underexposed indoor shots, presumably taken without flash, and a number of photos of 2 young women standing in a garden.
The film was Kodacolor II, which was introduced in 1973, so the photos must have been taken after that date, but the style of dress suggests they were taken in the 1970s. Here's an example: 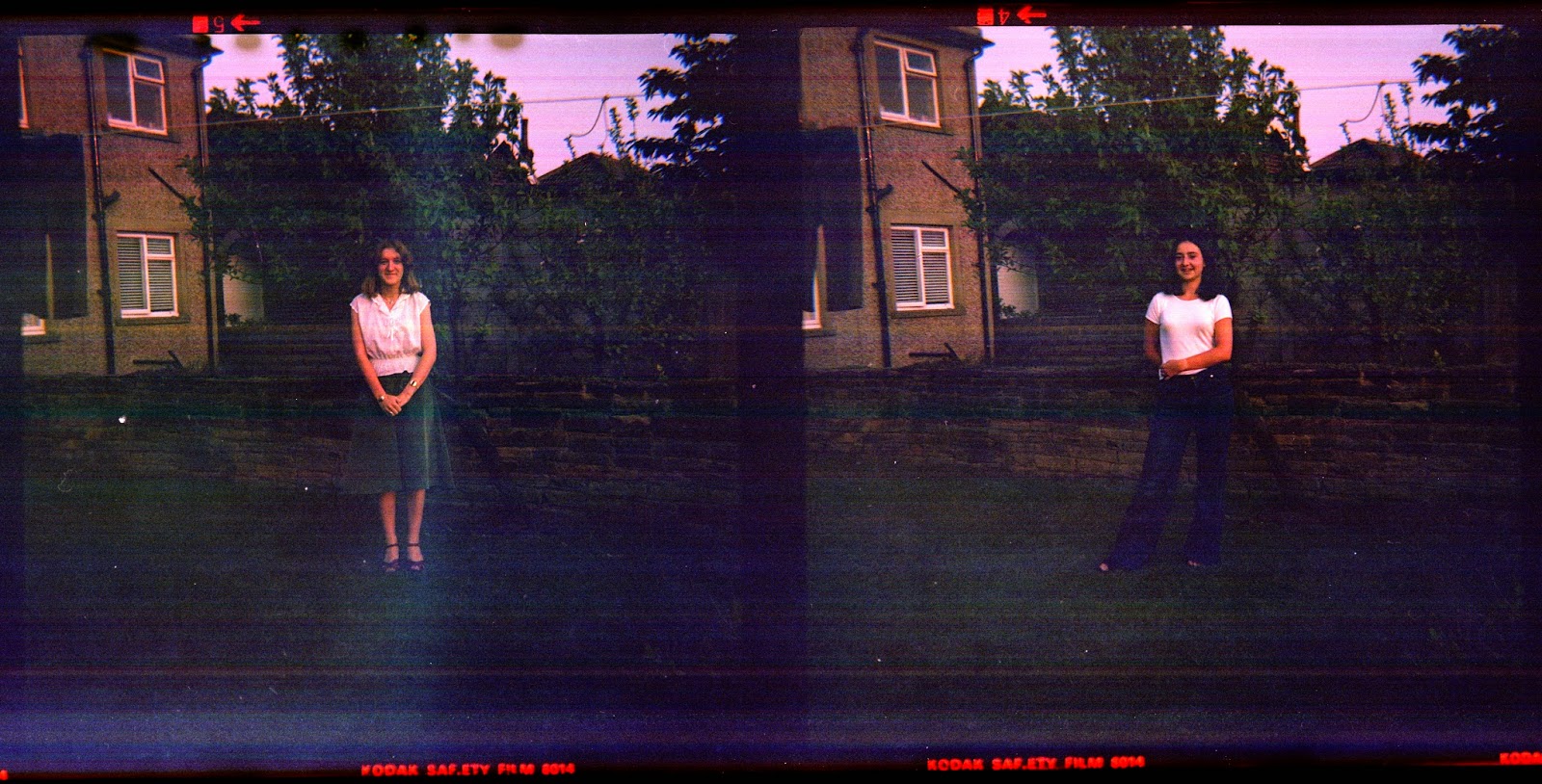 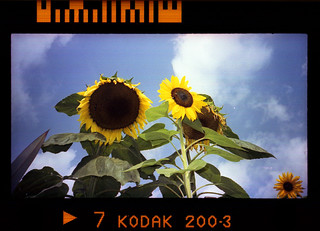 Two seasonal sunflowers in the walled garden at Clumber Park.
Posted by pho-Tony at 19:41 No comments: 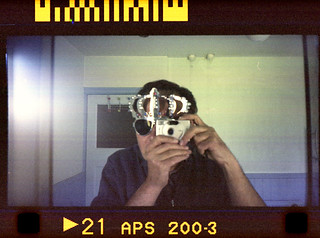 The auto-focus seemed to cope with this close up mirror shot.
Posted by pho-Tony at 19:39 No comments: 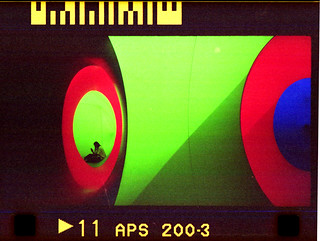 I took the Ixus with me when I visited this inflatable colourscape. I think the yellow film markings go woth the subject matter.
Posted by pho-Tony at 19:37 No comments: 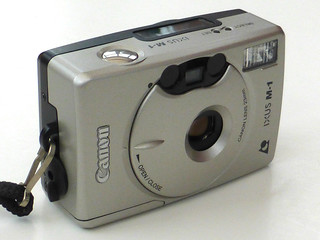 The M-1 is a fairly basic APS camera, it has auto-focus and a limited auto exposure system. The lens is a fixed focal length of 23mm.
I loaded it with a roll of necessarily expired Kodak Advantix ISO200 colour negative film.
Posted by pho-Tony at 17:18 No comments: 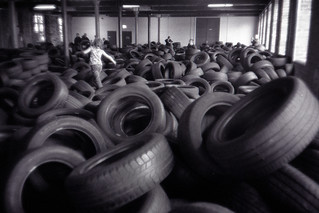 This is another indoor shot taken at full aperture, with the resulting narrower depth of field. The sea of tyres meant that at least something would be in focus!
Posted by pho-Tony at 18:31 No comments: 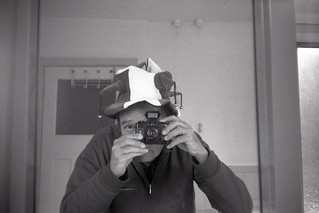 Taken indoors, with daylight from a window, this one was taken at almost maximum aperture, I took a couple of shots with the focus slightly different as there is no indication of the actual distance, just pictograms for portrait, group, scenery etc.
Posted by pho-Tony at 18:30 No comments: 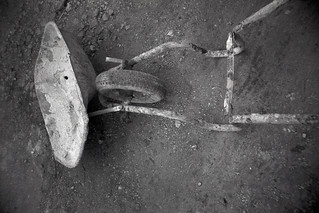 The lens seems quite sharp, with a fixed shutter speed of around 1/100th second, and using ISO400 film, most of the time I was using a small aperture, which will have helped the depth of field and reduced the impact of any focusing errors.
Posted by pho-Tony at 18:28 No comments: 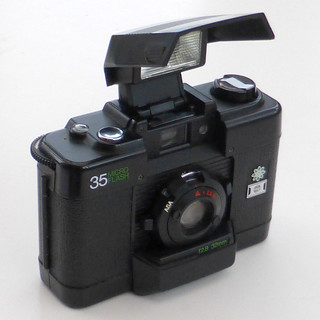 I rediscovered this little 35mm compact in one of my boxes of "junk" cameras and decided it deserved closer inspection. The lens is protected when not in use by a swing up cover which incorporates the built in flash. There is zone focusing, and a weather symbol dial which controls the aperture, though no f numbers are given. There appears to be a fixed shutter speed, I guess around 1/100th sec.
I've loaded it with Rollei RPX400 B&W film, so I will need to avoid bright sunlight as this would probably lead to over-exposure.
Posted by pho-Tony at 11:24 No comments: