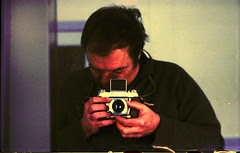 self portrait with Exa 1 camera
Originally uploaded by pho-Tony
There were only 4 usable exposures left on the film that I started in the Zenit-B. I decided I would try to take a reflected self portrait with each of the cameras, some more obvious than others (you have to look carefully to see me in the shop window reflection with the Zenit-B).
This photo shows two anomalies, the Newton's rings caused by contact with the scanner bed, and torn sprocket holes seen at the bottom right, when the film reached the end, it was still possible to wind on, and the last few sprocket holes were torn.
I don't think this camera has had a fair bite of the cherry this week, and I'll probably use it again sometime outwith the 52 cameras project.
Posted by pho-Tony at 19:27