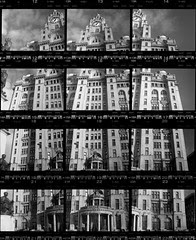 I took the first film to my local supermarket minilab today, where they processed it and returned it un-cut for me to scan at home. These are 12 consecutive frames of the Royal Liver Building, Pier Head, Liverpool. I took them with a view to scanning the negatives and making a "contact print" joiner. Although it was a colour film, I think it looks better in black and white, as the yellow and red markings on the film edges were a bit distracting. I've been meaning to try this technique for a while, and will try a bigger (and possibly more accurate) version later on in the project.