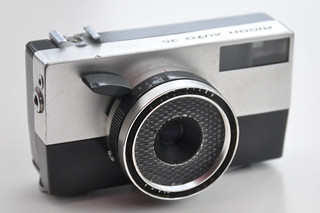 This unusual looking camera was made in Japan around 1960. It has a rudimetary automatic exposure system, the film type selected dictates the shutter speed, and the selenium meter sets an appropriatre aperture. The electronics in this example are no longer working, and the shutter only reliably fires at 1/160th sec, which according to the manual is the speed set by using film type "6". The manual also states what the aperture is for a given distance in flash mode, so using this I was able to have a choice of f4, f8 and f22. The lens if fixed focus.
I've loaded it with some Agfa Vista ISO200 film from Poundland.
Posted by pho-Tony at 17:25 No comments: 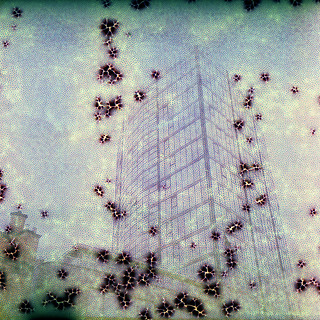 The subject, a new and largely unused office block, is just about visible through the various effects of aging and damaged emulsion.
Posted by pho-Tony at 19:00 No comments: 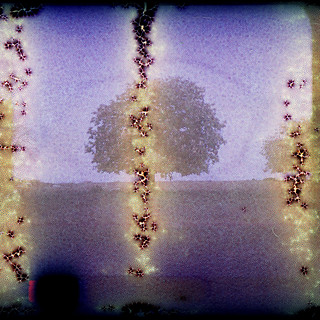 The reticulation (regular geometric pattern) is caused by the emulsion contracting during cooling, having been softened bit the warm developer. I quite like the effect in this one.
Posted by pho-Tony at 18:59 No comments: 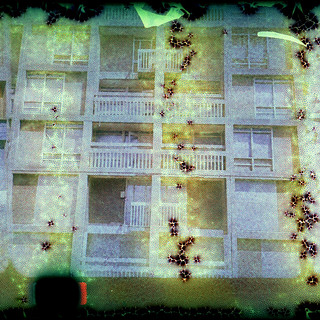 Unsurprisingly, given that the film expired in 1968, from a technical viewpoint, the quality is dire, but the distressed emulsion does have a certain appeal.
Posted by pho-Tony at 18:57 No comments: 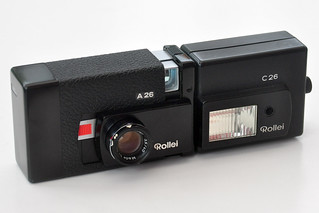 I bought this in a junktique shop last week for £13. There was no battery in it, so I was only able to confirm that the shutter fired at the default speed of 1/30th sec. These cameras often fetch higher prices on eBay, so I thought it was worth a punt. Sadly the electronics are dead, so if I was going to use it, I would be stuck with 1/30th sec. at f3.5 this would tend to result in overexposure in normal daylight, but I decided to try a very old cartridge of Ferrania Dia 28 slide film that I have had for some time. This expired in 1968, and smelt very musty when I opened it, so I don't have high expectations as the the results (if any).
Posted by pho-Tony at 22:33 No comments: 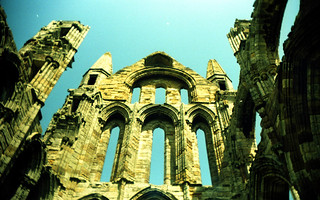 This one was taken with the 35mm lens,I've added a little sharpening in the post-processing, to try to compensate for the slightly out of focus negative.
Posted by pho-Tony at 16:53 No comments: 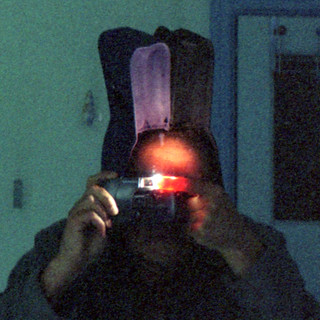 This is a square crop of my self-portrait photo.Taken when there was good natural light in this bathroom, I knew the flash would fire, so I covered it with my finger to prevent it blinding the camera.
Posted by pho-Tony at 16:52 No comments: 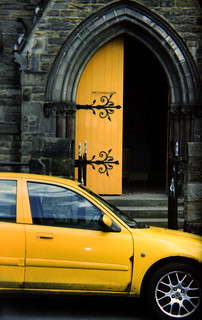 This one was taken with the 70mm lens engaged. The fixed focus lenses seem to be optimised for around 8-10 feet, though the focus on this one isn't too bad.
Posted by pho-Tony at 16:50 No comments: 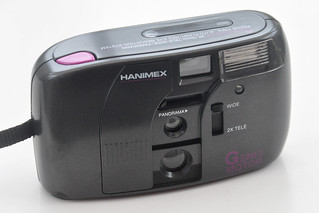 This cheap and cheerful camera has two lenses, one slightly wide and one slightly telephoto. A slider switches between the two by engaging a mirror in the light path. It purports to have a faux panorama format, but as far as I can make out, this simply masks the viewfinder, with no change at the film plane. It's possible that the film plane mask is broken, or it may be that if you used the panorama setting throughout, and told the processor, that you could order the 12" x 4" panoramic prints.
Posted by pho-Tony at 15:05 No comments: 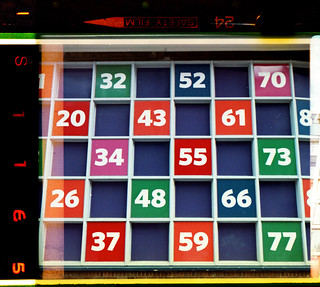 This grid with numbers seemed a suitable subject for the square negatives, and the numbers on the film borders provide some added interest.
Posted by pho-Tony at 14:58 No comments: 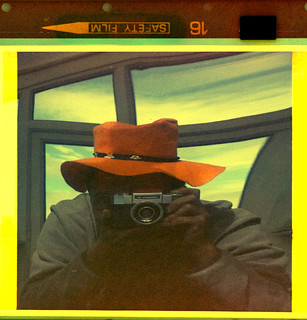 The distortion here is nothing to do with the camera, I used a piece of flexible mirror board in order to take the photo in a place with enough daylight.
Posted by pho-Tony at 14:57 No comments: 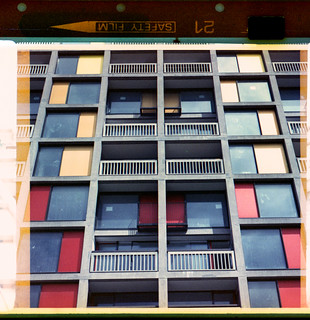 I was pleasantly surprised at the quality of the negatives from this very expired film, which was in a camera from a car boot sale. I overexposed by a couple of stops to allow for loss of sensitivity.
Posted by pho-Tony at 14:55 No comments: 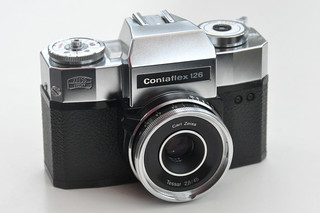 The Contaflex 126 has little in common with the Contaflex 35mm series of cameras. It shares the name, and had a superficial resemblance, but is quite a different camera. All the other Contaflex models have leaf shutters and fixed lenses, the 126 has a focal plane shutter and interchangeable lenses, but has a limited range of shutter speeds, and of course crucially takes the long obsolete 126 cartridges. I was prompted to borrow this camera from my dad, having found a partly used 126 cartridge in a Kodak Instamatic camera from a car boot sale. It remains to be seen what life there is left in this 30 year old film.
Posted by pho-Tony at 22:13 No comments: 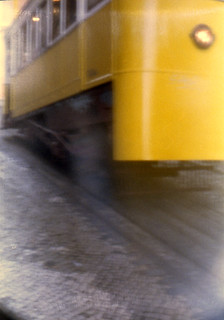 This is another means of ascending Lisbon's hills, this is the Elevador da Gloria, a funicular tram. The only suitable surface to hold the camera still was the ground, and framing the shot was a matter of trial and error. I gave this about 10 seconds in the late afternoon shade.
Posted by pho-Tony at 19:34 No comments: 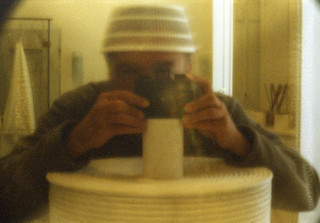 Indoor self-portraits are always a challenge when using a simple camera. The effective aperture of this pinhole is f250, necessitating a long exposure. The only way to keep the shutter open is to keep your finger on the lever, so the limit of the exposure was how long I could maintain this, I managed about 1 minute, which was enough to form an image on the film.
Posted by pho-Tony at 19:32 No comments: 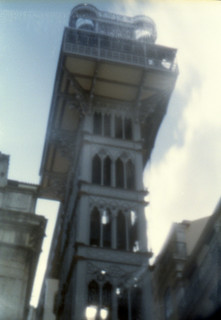 Lisbon is a hilly city, there are several lifts and funiculars to help take the strain. This is the Elevador da Santa Justa, which was designed by a pupil of Gustav Eiffel. The camera was braced against a traffic light post, for an exposure of about 2 seconds in bright sunlight.
Posted by pho-Tony at 19:30 No comments: