See the description for information!

See the description for information!

I took the Samurai film to the local minilab this morning, and they (or their machine) screwed it up fine style. I was handed a wet, part developed, part fogged, unfixed, unbleached film, together with my money back! (and an apology). Something jammed in the machine and they had to fish it out part way through.

I took it home and fixed it in B&W fixer, and there may be some interesting unplanned nuggets to scan, but basically it's wrecked!
It was bound to happen sooner or later, luckily there was nothing too precious on the film, and at least there was enough to see that the camera works OK.
I might shoot my first black and white film with the intention of processing it myself next week...
Posted by pho-Tony at 20:02 3 comments: This strange looking camera, despite resembling a fairly recent camcorder, is in fact a 35mm half-frame SLR. It was made around 1988 and has a 3x zoom and fully automatic focus and exposure. I've loaded it with a Kodak Color Plus ISO 200 film, and plan to make some contact sheet joiners. 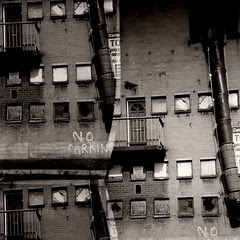 I thought this one was improved by a square crop, to echo the repeating square windows of the subject. 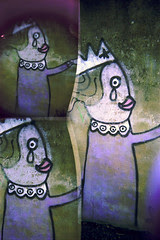 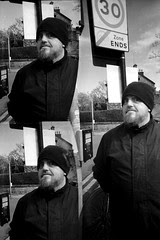 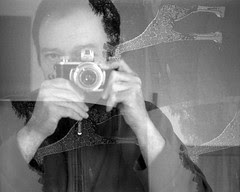 This film started off in the Kodak 35, than after about 26 exposures I rewound it and loased it into the novelty Robot camera. This is never an exact science, and I'm often pleasantly surprised by the little accidents that result. My reflected self portrait has become enmeshed with a metal giraffe. 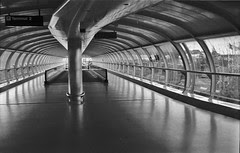 I went to a course in a bland modern hotel at Manchester Airport, this was taken in one of the overhead covered walkways that link the various buildings. 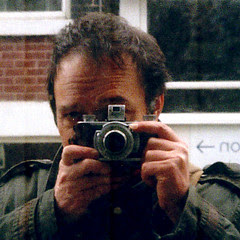 This reflection was in the mirrored windows of an office building. 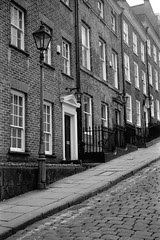 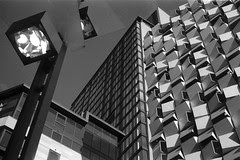 These are some of the new building in St Paul's Place in Sheffield City Centre, although the film was a colour one, I felt that black and white worked better for this image. 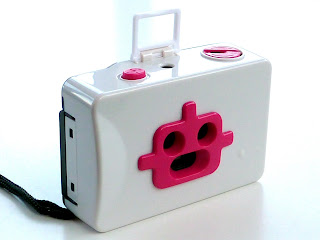 Last week I took a couple of dozen photos with the Kodak 35. I've now moved the film into this novelty 3 lens "Robot" camera, continuing my theme of trying to use a camera with the same number of lenses as the current month number. The 2 lens stereo camera for February still has the film I started in week 9, so there are no photos from that one yet.
This is a simple point and shoot camera, so needs good daylight, it was looking good yesterday, but gloomy and wet today...
Posted by pho-Tony at 18:26 No comments: 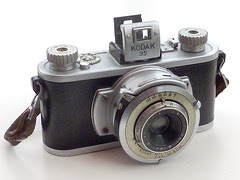 This was the first mass produced 35mm camera from Kodak. It was introduced in the late 1930s to rival the Argus range (see week 8). This is one of the post-war models with a 51mm f4.5 Anastigmat lens, this lens was renamed the Anaston in 1947, so this example must be earlier than that.
I'll put one of the ISO 200 Kodak films that came last week in it, hope they are OK! 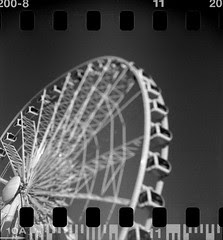 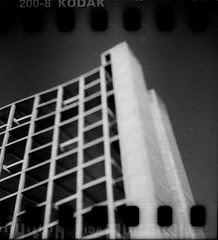 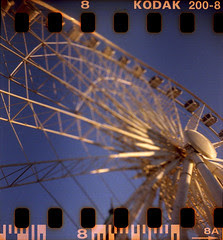 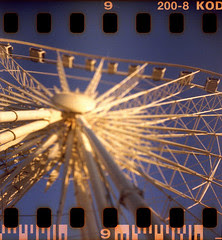 The focus problem is well demonstrated here by the distortion of the wheel.
Posted by pho-Tony at 15:33 No comments: 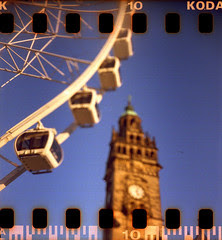 Sheffield Wheel and Town Hall
Originally uploaded by pho-Tony
This camera takes 127 rollfilm, I re-spooled some 35mm colour negative film into a 127 backing paper. I am puzzled by the out of focus centres, with sharp peripheries, I would have expected the opposite from a low quality lens (though I think this lens is reasonable one anyway). It could be due to the film bulging away from a flat plane, but I'm not convinced. I scanned the negatives to include the sprocket holes, as the original frame size is 3cm x 4cm, so the whole width of the 35mm film is exposed, including the spaces between the perforations.
Posted by pho-Tony at 15:27 1 comment: 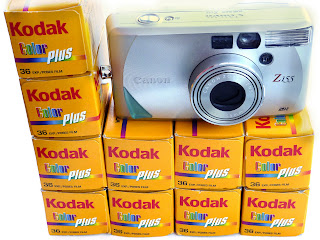 These arrived today via Ebay. I paid £5 + £2 p&p for 10 rolls of film (in date) and a Canon Z155 camera. I'd have been happy to get the films at 70p each (cheaper than Poundland!), so the camera, which seems to work, is a bonus. I wouldn't normally go near this type of very recent auto-everything camera, but I'm tempted to give it a try sometime.
Posted by pho-Tony at 19:55 No comments: