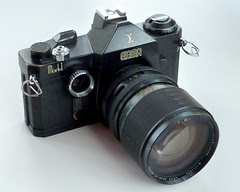 This week I'm using another SLR, but then I'm going to move on to some other types of camera. This was the first (and only) 35mm SLR I ever bought new, if memory serves, it cost £103 in 1974, and came with a 39-80mm zoom lens. It has coupled TTL metering, but the shutter is entirely mechanical, and no batteries are needed other than for the meter. I haven't had a film in it for probably 25 years, but it all seems to work OK, and the shutter speeds look and feel accurate. Even more surprising is that the exposure meter battery still works, it may even be the original, but it's certainly at least quarter of a century old!