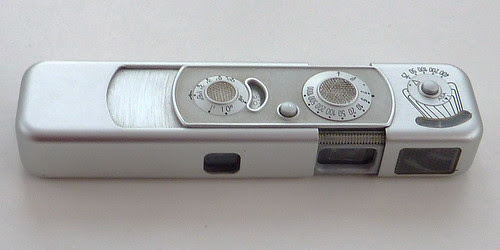 Minox B, a photo by pho-Tony on Flickr.
The Minox B is a classic spy camera, taking tiny 8mm x 11mm negatives on 9.5mm film. The "B" was produced between 1957 and 1972, and the styling of the light meter in this one suggests that it is a later model. It's a sophisticated piece of kit, and feels like a precision instrument in use. The mechanical shutter has speeds down to 1/2 second, and makes a very satisfying quiet purr when fired.
I used a home made film slitter to cut down some 35mm film before loading it into a used Minox cassette.
Posted by pho-Tony at 18:26