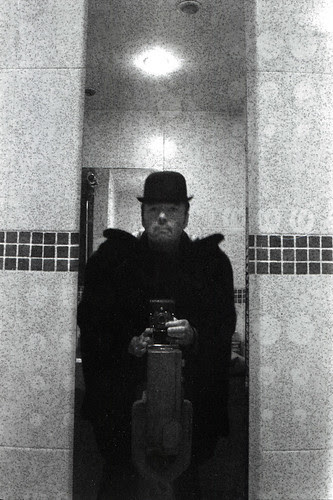 reflected self portrait with Kodak No.1 folding camera and bowler hat, a photo by pho-Tony on Flickr.
The Shanghai film proved to be rather poor quality, and the backing paper markings are clearly visible, especially in under-exposed negatives like this one. The apertures are numbered 1-4, with no "f" number given, I stopped right down (beyond number 4) to get the most depth of field, as there is no focussing, and I suspect the hyperfocal distance is further away than the demands of this close shot. Using the "B" setting, I gave this 30 seconds, and was worried that I might have over-exposed it. In fact is was markedly under-exposed, the f number is probably f32 or smaller, as in identical lighting, I have found 30 seconds should be plenty long enough at f22.
Posted by pho-Tony at 18:49