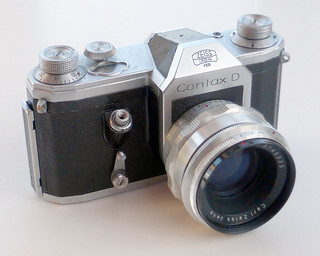 Although the Contax D uses the Contax name, it bears little resemblance to the classic Zeiss Ikon Contax cameras, after world war 2, Zeiss Ikon was split between East and West Germany, initially both companies used the Contax name, but after legal battles, the right to use it was given to the West German branch. The East German part became Pentacon (said to come from "Pentaprism" and "Contax"). These SLRs were the first to use the pentaprism for viewing the focusing screen.
Posted by pho-Tony at 10:45