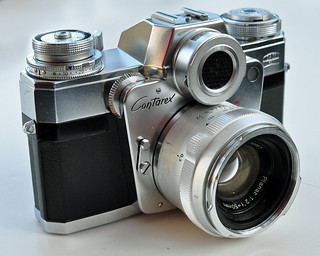 This is rather a special camera to me, it belonged to my father who died in October, this was one of his favourite cameras. It's a very heavy, but precision made camera, and was the first of the Contarex series of SLRs made from the late 1950s. I've loaded it with HP5 Plus, ISO400 black and white negative film.
Posted by pho-Tony at 13:59