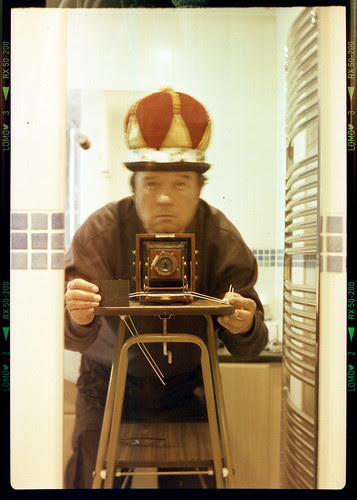 reflected self-portrait with Lancaster Instantograph camera and bowler crown, a photo by pho-Tony on Flickr.
The camera's tripod bush was recessed quite deeply into the baseboard, so I was unable to mount it on any of my tripods. I improvised a stand from a projector stand and some cable ties, this was probably more stable than a tripod anyway.
The aperture goes down to f128, but I used f64 for this one, requiring an exposure of about 90 seconds, this explains the motion blur on me, but the steadiness of the rest of the scene.
Posted by pho-Tony at 19:11