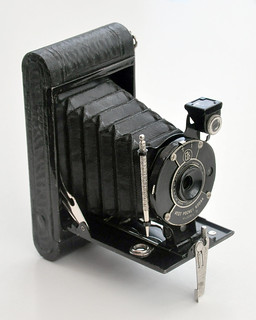 Kodak made Vest Pocket "VP" cameras for a number of years, this is one of the later versions. An earlier "VP" was dubbed the "Soldiers' Camera" as many were taken on active service during World War One. This is a very simple camera, it has a single shutter speed plus "B", there are four numbered apertures provided by Waterhouse stops. I loaded it with some expired Efke 100 black and white negative film.
Posted by pho-Tony at 18:42