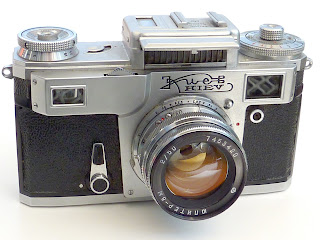 The Russian Kiev cameras were copies of the Zeiss Contax range. After WW2 the Russians removed the production line equipment from the Zeiss factories, and used it to make identical cameras in the Soviet Union. Quality control was not tight, and there were very good, and less good cameras made. This one was made in 1974, the same year that the final version of the Kodachrome colour slide film was introduced. I have removed my part used roll of Kodachrome from the Kodak Retina camera that I used in week 19, and will finish it off in this Kiev.
Posted by pho-Tony at 20:15 No comments: 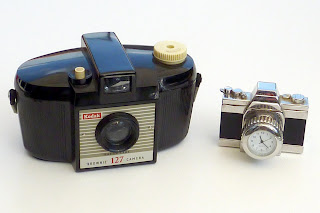 The Brownie 127 is a very common, but classic camera, this one cost £1, but has a crack on the front. I wondered about removing the lens and mounting it on a DSLR. The little novelty clock now sits on the window sill facing me.
Posted by pho-Tony at 19:50 1 comment: Taken at the Whit Fair in Weston Park, bright sunlight, f22 and the focus set at 3-6 feet. dandelion clocks, originally uploaded by pho-Tony.
This one was taken at f11 (the maximum aperture) with the focus set at 3-6 feet (the closest setting)
Posted by pho-Tony at 19:25 No comments: Zeiss Ikon Box Tengor, originally uploaded by pho-Tony.
I decided that this week I would try a roll of the SHANGHAI GP3 120 film that arrived recently. I was thinking of using one of my old folding 120 cameras, then I discovered this Zeiss Ikon box camera in my collection. I'd completely forgotten I had it, but it seems the perfect companion to last week's Baby-Box Tengor (big brother or father? I'm not sure).
This takes eight 6x9cm negatives on a roll, so it will also be the largest image size so far this year. Like the baby box, it's specs are a little above the run of the mill box camera, it has 3 apertures, and 3 focus zones, I had assumed the focus was achieved by moving the lens backwards and forwards, but on closer inspection it turns out to work by moving a different lens into the axis behind the rear element.
Posted by pho-Tony at 19:23 No comments: reflected self portrait with Baby-Box Tengor, originally uploaded by pho-Tony.
I took a tripod with me to take this photo, with a view to using the "B" setting to make a brief, maybe 1/2 second exposure, but the morning sun was bright enough to hand hold. I had to stoop down to make sure I was in the small area directly illuminated by the sun, but the exposure seems to be about right.
Posted by pho-Tony at 22:42 No comments:

bootsale car park, originally uploaded by pho-Tony.
There will be no photos from last week's camera (Retina 1) for some time, so here is one of the pinhole photos I took on WPPD, 25th April.
Posted by pho-Tony at 19:39 No comments: Sycamore, originally uploaded by pho-Tony.
There will be no photos from last week's camera (Retina 1) for some time, so here is one of the pinhole photos I took on WPPD, 25th April.
Posted by pho-Tony at 19:38 No comments: 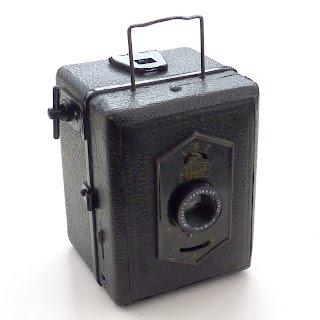 This is one of my dad's cameras, it takes sixteen photos on a roll of 127 film. This particular model was made between 1931 and 1934, it has variable apertures and a focusing lens, giving it above average specs for a box camera.
Posted by pho-Tony at 22:24 1 comment: Kodak Retina 1 camera, originally uploaded by pho-Tony.
This is a type 126 version of the Retina 1, made in Germany between 1936 and 1937. I have loaded it with my 'heritage' roll of Kodachrome 64 colour slide film, now discontinued, and only processable until the end of 2010. I decided to use this camera as it is from the same era as the first Kodachrome film, which was introduced in 1935.
I plan to take a few frames with this camera, before transferring the film to another camera, probably one dating from around 1974, when the current (or rather last) version of the film was introduced.
The photos will not be available for a while, as when I have finished the film, it will have to go to Kansas for processing, with a turnaroud time of several weeks.
Posted by pho-Tony at 14:53 No comments: mirror self portrait with Laack camera
Originally uploaded by pho-Tony 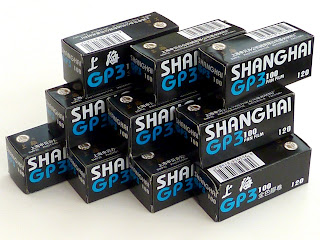 These ten rolls of SHANGHAI GP3 film arrived from China today. They were probably delayed by the Icelandic volcano. They are cheap (less than £12 for 10, including shipping) and it will be interesting to see how they perform, black and white, so I'll be processing them myself. Reading various discussions suggest that the main problem with this film is its curliness.
Posted by pho-Tony at 19:33 2 comments: