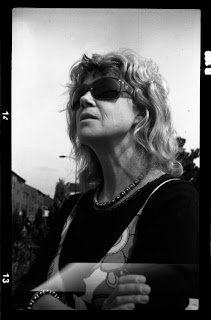 I developed the film in Ilfotol 3 at 1:14 dilution for 7.5 minutes at 20 deg C. All the negatives have the same light leak (at the bottom of the frame) though this is less noticeable on the photos taken in duller conditions.
All in all, I'm very pleased with the results from my first roll of EFKE 100 film.
Posted by pho-Tony at 22:23 No comments: 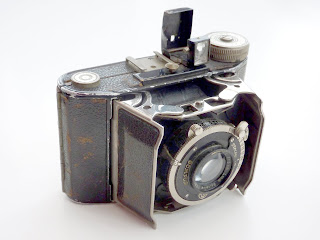 This is an interesting little camera. It is about the same age as last week's Korelle, probably made in 1932. There is no name on the body, but the lens gives the maker as Laack of Rathenow. The "barn doors" design is quite unusual, and this camera's body appears to be identical to the Rodenstock "Rodinett" and the "Ingo" by Glunz. The lens is f2.7, which is a larger aperture than normal for this type of camera. It takes sixteen 3cm x 4cm photos on a roll, I've just loaded it with EFKE 100 black and white film (same as last week).
Posted by pho-Tony at 17:49 No comments: The Sheffield Giants
Originally uploaded by pho-Tony
I developed the film in Ilfotol 3 at 1:14 dilution for 7.5 minutes at 20 deg C. All the negatives have the same light leak (at the bottom of the frame) though this is less noticeable on the photos taken in duller conditions.
All in all, I'm very pleased with the results from my first roll of EFKE 100 film.
Posted by pho-Tony at 17:37 No comments: I developed the film in Ilfotol 3 at 1:14 dilution for 7.5 minutes at 20 deg C. All the negatives have the same light leak (at the bottom of the frame) though this is less noticeable on the photos taken in duller conditions.
All in all, I'm very pleased with the results from my first roll of EFKE 100 film. road markings, originally uploaded by pho-Tony.
I developed the film in Ilfotol 3 at 1:14 dilution for 7.5 minutes at 20 deg C. All the negatives have the same light leak (on the right of the frame) though this is less noticeable on the photos taken in duller conditions.
All in all, I'm very pleased with the results from my first roll of EFKE 100 film.
Posted by pho-Tony at 17:32 No comments:

I've put a film in my homemade 5 pinhole cylindrical blender camera. I made four exposures today, but will leave the rest for when suitable subjects arise over the next few weeks, rather than rush to finish the film now. Maybe I can also count this as May's five 'lens' camera?
The photo below was taken with this camera last year in Liverpool: 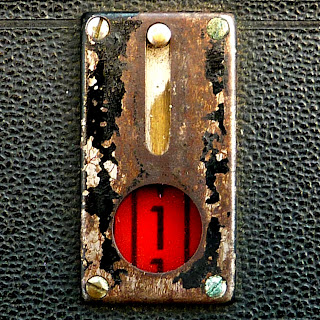 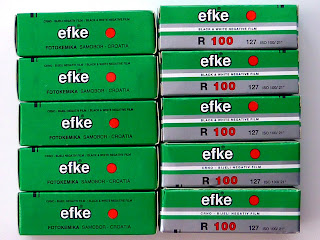 Park Hill Flats - stereo pair, originally uploaded by pho-Tony.
I loaded this film into the Iloca at the end of February, but decided to leave it in and finish it off over the following weeks. The first photos were taken in Sheffield, the rest on a day trip to Liverpool and Crosby.
Posted by pho-Tony at 19:38 No comments: 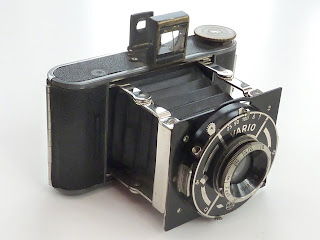 I've decided it's time to start using some of my collection of folding 127 film cameras. There were three possible formats for 127 film, the largest made eight 4cm x 6cm photos on a roll, then there was twelve 4cm x 4cm, and finally sixteen 4cm x 3cm per roll. I have examples of all three formats, and this camera is one of the larger ones.
This Korelle was made in the early 1930s, and is one of the simpler models in terms of shutter and lens. It folds up to a fraction of it's extended depth, and came with its original leather case.
Of course 127 film is hard to come by nowadays, I've taken the plunge and ordered 10 rolls of Efke ISO100 film, which hopefully will arrive before the weekend. I was encouraged by my first recent attempt to develop a black and white film (in week 14) and will have to develop these 127 films myself.
Posted by pho-Tony at 17:56 1 comment:

the owl and the pussycat
Originally uploaded by pho-Tony

The Owl and Pussycat went to sea in a beautiful pea green boat...

A giant paper daffodil poses for the press at the Sharrow Lantern Carnival.

the birth and death of Kodachrome 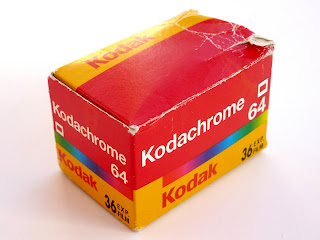 Today is the 75th anniversary of the introduction of Kodachrome colour transparency (slide and movie) film. Production was discontinued in 2009, and the one remaining lab in the world which processes the films (in Kansas USA) will stop developing them at the end of December 2010.
The Kodachrome process is quite different from all other colour slide films, and it is not possible for any other labs to develop them. In Europe, the films were sold "process paid" and an envelope was supplied to post the film to the lab. The last European lab was in Switzerland and closed on 2006. Kodak will be honouring the pre-paid envelopes, which will still need to be sent to Switzerland, from where they will be sent in batches to Kansas. To allow for the further travel, all European orders will have to be sent before the end of November.
The Kodachrome emulsions evolved over the years, and the version that has just been discontinued (K-14 process) was introduced in 1974.
I bought this expired film last year, and now have to decide which camera to use it in. I may split it between two cameras (having e-mailed the Kansas lab to check that they can handle uneven spacings). It would be nice to use a camera that dates from the time of the first Kodachrome film, and then maybe one from 1974, when the last version was introduced.
Posted by pho-Tony at 17:59 No comments: 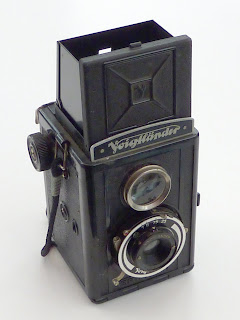 This is a Voightlander Brilliant, I paid £3 for it at a bootsale on Sunday. At first glance it could be a fully fledged twin lens reflex, but it fact it is a pretty basic camera with a non-focussing waist level viewfinder. The Brilliant was first made in 1932 and went through several small variations, production was resumed after the war in 1949. Based on the lens type, and other features, this example appears to be one of the later pre-war models made in the mid to late 1930s. It all seems to work, so I'll probably put a film in it at some point. It would also be a good "bottom" camera for a TtV (through the viewfinder) setup.
Posted by pho-Tony at 12:22 No comments: 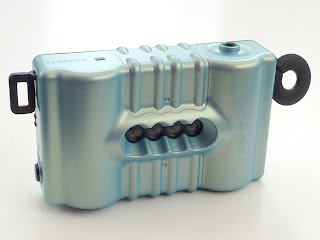 This is one of the "Lomography" range. The Lomo cult started with the Russian LC-A, but expanded to include a range of novelty and toy cameras. The Lomography branding and packaging are very strong, and the products are generally considered to be overpriced. I've never bought a new Lomography camera, but have aquired a number of the models from boot sales, charity shops and Ebay. This brand new, fully packaged Supersampler was £4.49 in a charity shop, presumably an unwanted gift, not bad considering they retail for ten times that price. It take 4 images on one 35mm frame, each image is tall and thin, and they are taken one after the other in either 0.5 seconds or 2 seconds. Other than that there is no control or adjustment, the film is wound on by pulling a notoriously fragile cord. Being basically a point and shoot with fixed aperture and shutter speed, it needs good daylight to work.
Posted by pho-Tony at 11:35 No comments:

zebra display
Originally uploaded by pho-Tony
Another photo from Tring. I saw this display on televison in a programme about the Natural History Museum in London. We were passing close to Tring on the way to visit family, so I couldn't resist going to see it. There's something very strange about these huge animals sitting on glass shelves!
Posted by pho-Tony at 12:34 No comments:

This one demonstrates nicely the curvy distortion that happens when a "flat" subject is photographed with a swinging lens onto a curved film plane.

Taken at the Tring branch of the Natural History Museum. This building houses a series of huge traditional display cases filled with stuffed animals. Using ISO 1600 film allowed me to hand hold the camera and/or use a small enough aperture to get a reasonable depth of field. 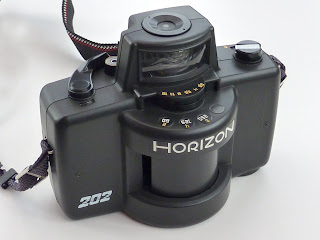 In week 15 I'm planning to use another Russian camera. I've used this one quite extensively since I bought it new 2 years ago. It's a swing lens panoramic camera taking in a horizontal field of view of about 120 degrees, and making 58mm x 24mm images on 35mm film. One of the reasons I like this camera is because you can't quite emulate it using a digital camera, as far as I know, there are not yet any digital cameras with curved sensors, though of course many incorporate various software panoramic functions.
I'll be putting in a roll of slightly out of date ISO1600 Fuji colour negative film with a view to using it to take some photos at the forthcoming Sharrow lantern festival.
Posted by pho-Tony at 18:06 No comments: Regular viewers may notice that "Mop" is my avatar both here and on Flickr. reflected self-portrait with Kiev 60 and tea cosy
Originally uploaded by pho-Tony
Posted by pho-Tony at 22:48 No comments: