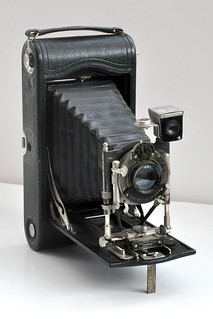 I suppose week 300 is something of a milestone, so I decided to mark it by using this large old Kodak folder. It was made between 1914 and 1934 and used the A122 film, to take postcard sized negatives, which would then be contact printed. Needless to say the film is long obsolete, so I'm using 120 film, which is about 25mm narrower than the postcard film. By using an old 120 film, I worked out how many turns of the spool were needed to advance the film between exposures. If my calculations are correct, I should get five exposures out of the roll.
Posted by pho-Tony at 17:26